When water flows through a bed of ground espresso beans, ultimately resulting in a delicious latte, the water is undergoing a process called percolation. The water slowly meanders through the coffee at just the right rate to extract the rich coffee flavors. In general, percolation refers to liquids filtering through a porous medium. The process can describe not only the generation of lattes, but also a host of other phenomena, such as how diseases spread and even physics concepts such as magnetism.

For mathematicians like Tom Hutchcroft, who joined the Caltech faculty last year as a professor of mathematics, the most interesting aspect of percolation is what happens during a phase transition, the point where an abrupt qualitive change in the system occurs. "You only change one factor in the system a tiny bit, and then you get a big change," he says. A classical phase transition occurs when water freezes.

We met with Hutchcroft over Zoom to learn more about the math of percolation and what he is enjoying about Caltech so far.

What does percolation have to do with the spread of a disease?

Percolation theory is a way of describing clustered components in random networks and can be applied to complex things like the spread of an infection through a population. Systems like these have phase transitions. With epidemics, there's a critical point or phase transition called "R nought," or R0. This value depends on the average number of people that an infected person infects. When R nought is below 1, the epidemic will die out; when it's above 1, it will grow exponentially. When R is exactly 1, the infection will die out but very slowly. When you look at this point in models, you tend to have a lot of mathematically interesting behavior. And when you use branching, tree-like models for epidemics, which are a form of a percolation model, you'll get some interesting fractal geometry in the tree. This has been well understood since the 1990s. But even though you are doing something very simple, you get really mathematically rich objects coming out at the end.

How do mathematicians study these percolation models?

While physicists and other scientists may study the statistical physics or statistical mechanics of similar systems as a means to explain the behavior of the components, we mathematicians are interested in the pure math, which can be very complex and interesting. In general, we draw out grids, with edges and nodes, where the edges connect the nodes. These are the percolation models that explain how liquid can flow through a porous media. Imagine that for each edge of this grid, you flip a coin that has a probability "p" of being heads. If the coin comes out heads, you keep the edge, and if it comes out tails, you delete the edge.

When p is small, or the probability of keeping an edge is small, you will end up with small clusters of connections that are like small islands that don't connect to anything else. When p is greater than the critical parameter at which a phase transition occurs, called pc [pronounced pee-cee], you will get one big, connected cluster. When p is exactly equal to pc, we expect to get large, fractal-like clusters that permeate across the grid but do so in a zero-density way, with extremely long, tortuous paths.

If you look at the connections between the nodes at this phase transition, and under different scales, you will start to see the fractal and winding math.

What problems are you working on in this field?

The two-dimensional models are very well understood, and even models with 100 dimensions are easier to understand. But the three-, four-, and five-dimensional cases are extremely hard to study. One thing I'm working on is trying to crack the three-dimensional problem. The most basic question is to figure out if the phase transition occurs with a jump, what we call discontinuous, or more smoothy, what we call continuous. This problem has been open for a really long time and needs to be solved before we can move on to understanding all the cool fractal stuff that should be happening at the phase transition. I'm also working on other related problems, such as long-range percolation where the probability of two nodes having an edge between them depends on the distance between the nodes. Changing how this probability falls off with the distance has a surprisingly similar effect to changing the dimension of the grid and lets us treat the dimension like a continuous parameter.

What do you love about working on these math problems?

A lot of the appeal for me is that it's fun. When you get a good problem, you get hooked on it. Math is like the king of all puzzle games, but it goes beyond puzzles in that you the solution is very insightful. You not only solve the problem, but you build new conceptual frameworks for understanding other math problems.

One of the things that drew me to Caltech was the small class size. It feels less like lecturing and more like doing a seminar where you get to interact with everyone individually. I like the tight community here. Of course, the small size of Caltech can mean less interaction with mathematical peers, but a lot of that is going to be balanced out by the fact that the American Institute of Mathematics is moving its headquarters to Caltech. That's going to bring a lot more activity here, and people will be passing through regularly.

I also like the mountains in the Pasadena area, which we don't have back home in the UK. We've been going out hiking. You can look at a mountain on campus and then get in the car and be there in 15 minutes.

Since coming to Caltech, I've also set up the LA Probability Forum, a monthly mini-conference for the LA-area probability community, so that I get to regularly interact with my colleagues at UCLA and USC, and anyone else who would like to be involved. This has been really enriching for me both scientifically and socially.

These images show three different phases in a percolation model: before, at, and beyond the critical phase transition. As the probability of an edge being blue, or p, goes up (from left to right), it becomes easier for the blue portions to spread across the grid. At the point of the phase transition (middle), fractal-like clusters emerge that take long, meandering paths across the grid. Credit: Nils Berglund
Image Lightbox

These images show three different phases in a percolation model: before, at, and beyond the critical phase transition. As the probability of an edge being blue, or p, goes up (from left to right), it becomes easier for the blue portions to spread across the grid. At the point of the phase transition (middle), fractal-like clusters emerge that take long, meandering paths across the grid.
Credit: Nils Berglund
Download Full Image 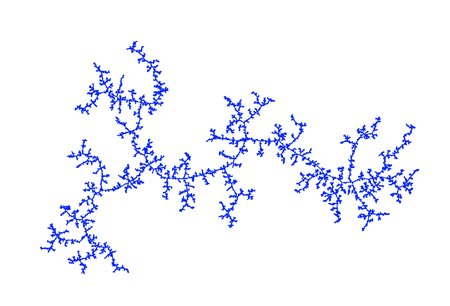 Hutchcroft is studying how the geometry of fractal trees like the one depicted here change when viewed in different dimensions. Credit: Tom Hutchcroft/Caltech
Image Lightbox 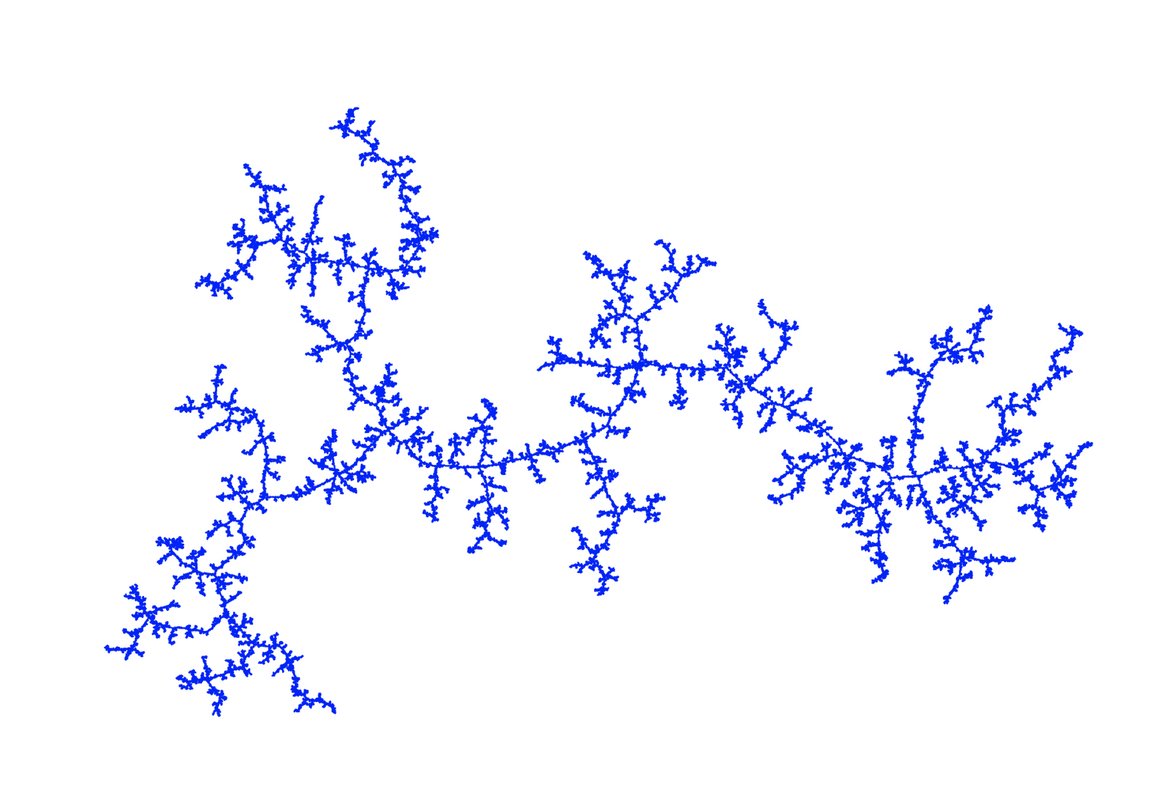 Hutchcroft is studying how the geometry of fractal trees like the one depicted here change when viewed in different dimensions.
Credit: Tom Hutchcroft/Caltech
Download Full Image 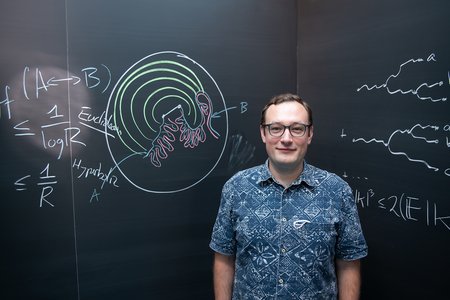 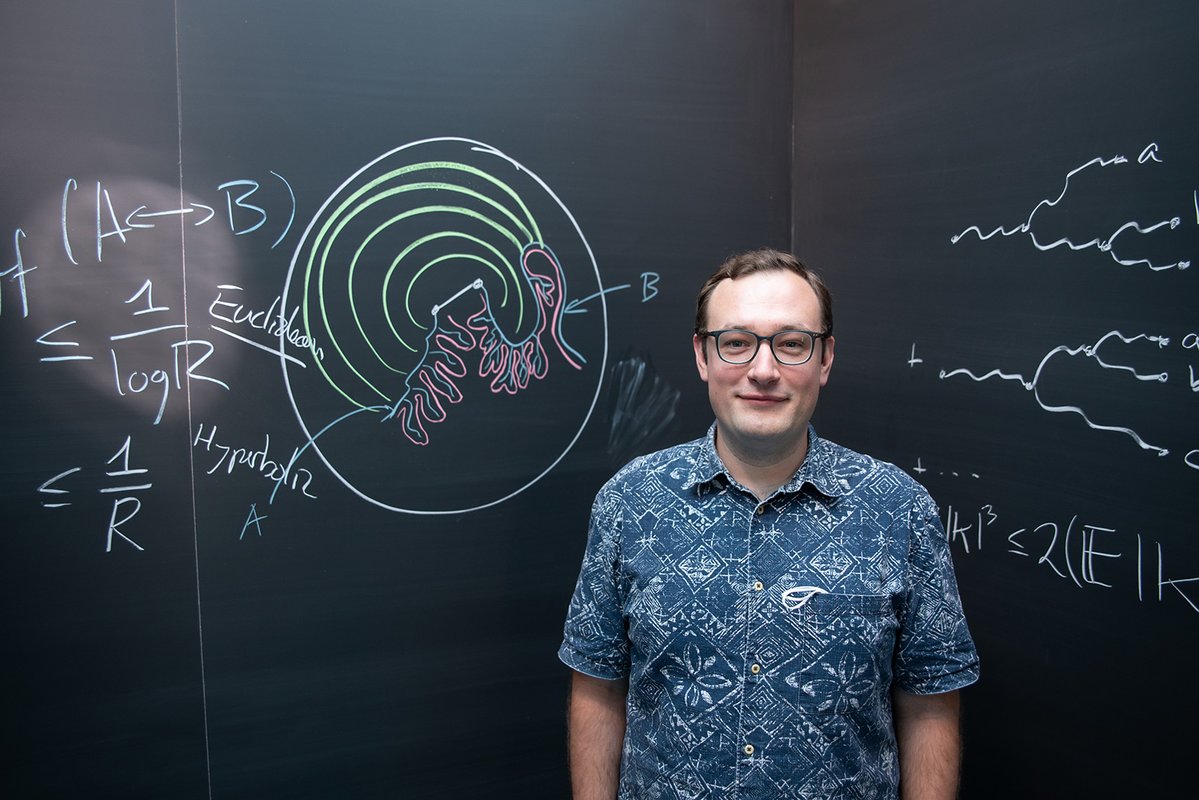