From birth, it takes humans almost two decades to reach adulthood; for a fruit fly, it takes only about 10 days. During a fly embryo's initial stages of development, the insect looks different from minute to minute, and its body plan is defined in just a few hours. Caltech researchers have now gained new insights into how a fly's genes influence this fast period of development—work that ultimately could shed light on the rapid cellular proliferation that occurs in other situations, including human cancers.

The research was done in the laboratory of Professor of Biology Angelike Stathopoulos. A paper describing the research appears in the December 17 issue of the journal Developmental Cell.

Unlike a human embryo, which begins as a single cell that divides into more cells, the early embryo of the fruit fly Drosophila melanogaster is a single football-shaped bag of dividing nuclei. Each division of the nuclei constitutes one nuclear cycle, which takes between 8 and 15 minutes to complete. After the 14th nuclear cycle, the bag contains about 6,000 nuclei. At this point, the embryo separates into individual cells and the length of the cycles increases.

A nucleus contains an organism's genetic information, and can be thought of as a library. Each gene is like an individual reference book, containing instructions on how to build a protein. These books—the genes—never leave the library, so in order for the cell to use the instructions to build a protein, a photocopy must be made and taken out of the nucleus. This process of photocopying is called transcription.

There are limits to how quickly a gene can be transcribed, and so some especially long genes cannot be transcribed in their entirety during the limited amount of time that constitutes a single nuclear cycle. Instead, only a portion of the gene gets transcribed—only a chapter of the book is photocopied.

For the Developmental Cell paper, a team of Caltech scientists led by former graduate student Jeremy Sandler (PhD '17) aimed to study what function, if any, these shorter transcripts have in the growing embryo.

In particular, the group studied the activity of one long gene with the counterintuitive name short gastrulation, or sog, during the early nuclear cycles of Drosophila embryos. The sog gene encodes a complex protein that is responsible for regulating cellular communication, or cell signaling. Sandler found that during the rapid early stages of Drosophila development, short transcripts of sog are produced that encode for a partial, yet still functional, protein.

Previously, researchers who detected the sog gene early in the developing embryo assumed that its presence must have been a mistake, as a partially transcribed gene generally is not translated into a working protein. But the Caltech team discovered that the truncated version of sog actually has its own important role in the embryo.

Normally, the full Sog protein regulates a kind of chemical communication channel between cells called the TGF-ß (Transforming growth factor beta) signaling pathway. The TGF-ß pathway is like a particular radio frequency: In the early embryo, cells use TGF-ß to communicate messages about the development of the fly's nervous system. (If cells want to communicate about some other process, they use a different signaling pathway.) The cells send messages with molecules called ligands.

The full Sog protein grabs onto ligands, ferries them around the embryo, and deposits them at the appropriate place to begin communication. The short form of the Sog protein that is produced by a truncated transcript also can grab onto ligands—but it cannot let go. This silences any attempted communication via the TGF-ß pathway.

Sandler explains: "The short form of the Sog protein, the form that is being produced during the very young stages of the embryo's development, mutes all communication on the TGF-ß channel by sequestering all of the ligands. It's like short Sog is saying, 'Hey guys, we can't send signals yet. It's too early to think about neuronal development.'"

Later in the fly's development, there is more time for the full length of the sog gene to be transcribed and for the full Sog protein to be produced. This complete protein can both grab and release ligands, so it is able to initiate TGF-ß signaling.

"We were excited to learn that the short form of this gene is not just a hasty, accidental, partial transcript," says Sandler. "It actually controls when a signaling pathway is turned on. This is a previously undescribed program in development that regulates the timing of signaling throughout the whole embryo."

Though Drosophila are very different organisms from humans, they provide a powerful model for studying gene expression during rapid development. Understanding the role that short transcripts play in a healthy organism may also provide insights into what happens when development goes wrong, such as in the case of cancer. When cells become cancerous, many short transcripts of genes are produced, and—as would happen if only one chapter of an instruction manual were copied and used—these short forms are missing key sequences that would otherwise keep the gene's activity in check. The Stathopoulos laboratory plans to continue working on understanding how these short transcripts are produced and how they affect normal development. 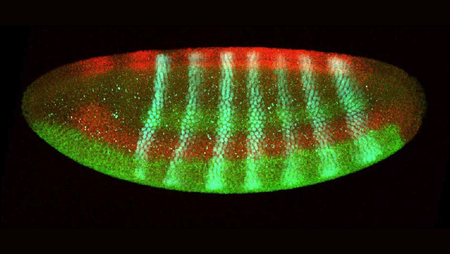 A Drosophila embryo at the point of cellularization, when it changes from a single "bag" of nuclei into individual cells. Credit: Courtesy of the Stathopoulos laboratory
Image Lightbox 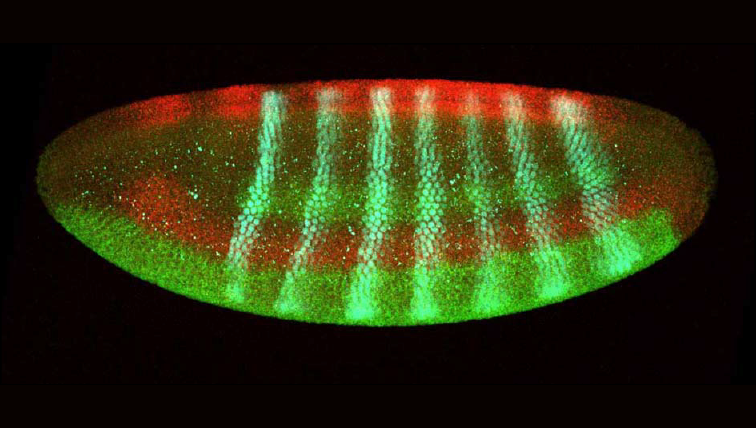 A Drosophila embryo at the point of cellularization, when it changes from a single "bag" of nuclei into individual cells.
Credit: Courtesy of the Stathopoulos laboratory
Download Full Image
Subscribe
The Caltech Weekly